Charles Lewis has established a professional career best characterized as a combination of innovation and public service.  Over the years, Charles has led philanthropic efforts ranging from founding an award winning, nationally recognized music school to jump starting the fundraising for Oregon’s monument to Dr. Martin Luther King, Jr.  Whatever the project, Charles Lewis is recognized as an effective, innovative leader that gets things done for Oregon-based foundations and nonprofits.

Charles Lewis was born in Missoula, Montana.  His father, Jerry Lewis, was a land surveyor and his mother, Carol, was a waitress.  Soon after he was born, Charles’ parents divorced. As a single mother, Carol raised six children mostly by herself.  Carol realized that she could have made more money going on welfare than by working her two jobs as a waitress, but her strong work ethic kept her working.  Nonetheless, the family lived below the poverty level and surviving with help from the Food Stamp and WIC programs.

With his mother often away at work, Charles would spend most of his days with his grandparents on their farm just outside of Missoula.  Growing up on a farm influenced Charles’ world view and instilled in him a set of values including the importance of hard work, innovation, and a sense of fair play.

Charles recalled one story from his grandfather, Bill.  When he was younger, Bill played on an American Junior League baseball team that traveled all over the United States.  On one trip to Texas, the team went into a diner to get some food.  The owner refused to serve Charles’ grandfather because he was part Native American.  Without missing a beat, Bill’s entire team rose from their seats and left the diner as a unified whole.  This story not only taught Charles the evils of racism, but demonstrated the importance of standing together against those who might unfairly judge another person because of their race.

While still in Montana, Charles’ mother got married again to Pete Garcia (100% Mescalero Apache).  Carol and Pete had two sons, JLara and Joseph.  Growing up, the family was fortunate to be able to experience Native American culture through pow wows and festivals in Montana, Washington, and Arizona.  Because of Pete’s status as an enrolled member of his tribe, the family survived in part with food support from the Bureau of Indian Affairs.

When he was 13, Charles Lewis moved to  Anchorage, Alaska to live with his father and step-mother Pam.  He attended Bartlett High School where he played on Bartlett’s State Championship Football Team and was Captain of the school’s State Championship Debate Team. When he graduated in 1990, he moved to Portland to attend the University of Portland.  Even though he had never been to Oregon before, he immediately fell in love with Portland.

While at the University of Portland, Charles had an experience that would shape his career in public service.  As part of his graduation

requirements, Charles took an unpaid internship with U.S. Senator Mark Hatfield.  “One day I was in the Senator’s office quietly stuffing envelopes in a corner.  It was lunch time and the office was empty except for the Senator, a senior staff member, and myself (and I don’t think they even knew I was there).  I remember listening and watching as the Senator and his staff member looked on to the street below, talking passionately about the homeless and what they could do to help.  There were no cameras on them, no reporters in the room, and they didn’t even know that I was there, but I saw a great man genuinely concerned about the most impoverished people in our community.  From that point on, I knew I wanted to take an active role in helping those less fortunate.”

Charles Lewis worked his way through college as an Alaskan construction surveyor during the summer months.  Charles worked 80 hours a week in some of the most remote parts of  Alaska, helping survey in roads, houses, and recreational centers for military personnel.  Like his father, Charles was a Teamster and member of Local 959 throughout his college years.

Immediately after graduation, Charles joined the U.S. Peace Corps and served two and a half years as a Water and Sanitation Technician in the Congo.  Charles was posted alone in Ouesso, one of the country’s most remote areas, and helped bring fresh drinking water to over 1,000 villagers.  Ouesso is on the edge of the immense, tri-national wildlife park called “Nouabale-Ndoki”, or “the Park of the Sorcerers.”  National Geographic called Ouesso the entry point to the “Last Eden,” one of the last untouched rainforests in the world.  Charles built the well at the base camp in Nouabale-Ndoki that provides fresh drinking water to Michael Fay and Jane Goodall among many others as they work to help preserve this last untouched rainforest.

After completing his service in the Peace Corps, Charles returned to Portland and worked briefly for Fred Meyer’s Public Affairs Office and as a legislative assistant in the Oregon Legislature.  At Fred Meyer, Charles helped Cheryl Perrin and Betsy Brumm organize the fundraising for “The Dream,” Oregon’s monument to Dr. Martin Luther King, Jr.  He later joined the Board of Directors and helped organize the statue’s dedication on August 28th, 1998, thirty five years to the day of Dr. King’s “I have a dream” speech. 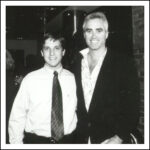 In 1997, Charles Lewis was accepted to the John F. Kennedy School of Government at Harvard University.  Because of his demonstrated commitment to public service, Charles was awarded one of the school’s first Public Service Fellowships and received a full ride scholarship.  Charles returned to Portland during his summer break to serve as a Site Supervisor for Habitat for Humanity and to work as an Ombudsman Associate for Mayor Vera Katz.

At Harvard, Charles studied business and government and was elected Student Body President.  Charles graduated in 1999 with a Master’s Degree in Public Policy and a concentration in Business and Government.  Because of his extensive public service activities, Charles was selected to speak at graduation and was awarded the Robert F. Kennedy Award for Excellence in Public Service, one of Harvard’s highest honors for public service.

After graduation, Charles returned to  Portland, slept on a friend’s couch for a year,

and started up Ethos, a nonprofit music center, on his credit card.  Charles started Ethos in response to budget cuts that decimated music education programs in schools throughout Oregon.  Extensive cuts in public schools made the benefits of music something only the most affluent students could afford.  Reaching over 7,000 students a year with classes, workshops and presentations, Ethos rapidly became one of Oregon’s largest and most successful music schools.  Under Charles’ leadership, Ethos established after school music programs in over 150 schools and community centers.  Ethos has gained a national reputation for reaching underserved youth and has been selected 6 times as one of the top fifty after school arts programs in the entire United States by the President’s Commission on the Arts and Humanities.

In 2002, Charles Lewis was introduced to another community activist, Sarah Coakley.  After about a year of dating, Charles and Sarah hopped on a plane and eloped in Las Vegas, Nevada.

Interested in further developing their business skills while showing off their favorite city, Charles and Sarah started Portland Duck Tours in 2006.  Similar to other “duck tours” throughout the United States, this business used a locomotive sized amphibious bus for land and water tours throughout Portland.  Unlike other tour companies, however, Portland Duck Tours used bio-diesel to insure an eco-friendly trip and donated 5% of its profits to schools and nonprofit organizations.  Even they they loved all of the quacking, they eventually sold the business to make way for their own duckling, their first child born in June 2008, and so that Charles could focus on his campaign for Portland City Council.

Charles Lewis continued to serve as Executive Director of Ethos Music Center until January of 2012 when he left to seek new challenges and new opportunities.  Literally the day after Charles told Ethos’ Board of Directors of his plan to move on in November of 2011, the Marie Lamfrom Charitable Foundation started searching for someone to start up a new initiative for them in West Linn, Oregon.  With a combination of duties ranging from those required of an Executive Director to those of a Program Officer, the new position at the foundation was the perfect fit for Charles’ abilities and the foundation’s interests and plans.  Charles joined the foundation in late January 2012 and spearheaded the creation of an entirely new educational initiative for kids in West Linn and surrounding communities.